Testing is performed in the testing area by means of firing single- or double-sectioned perforator.

Before the test start, the external diameter (overall dimensions) is measured not less than in three sections to a precision of 0.1 mm. 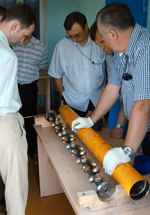 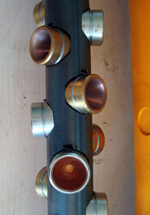 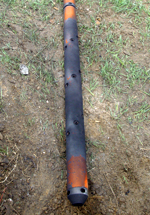 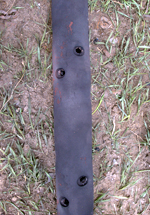 The perforator is prepared and assembled according to technical drawings and manuals with all details and VM. Charges are placed into all frame holes.

During the water environment perforator tests, the test pipe, imitating the casing pipe, is prepared; test pipe material is of any kind of steel, entrance hole diameter is between 130 and 170 mm, wall thickness – more than 5 mm; length not less than perforator length. One of the pipe ends is pressurized.

The perforator is placed inside the pipe and centered. The area between the perforator and pipe wall is filled with cold water (natural water permissible); water surface should be higher than head and tandem connection, but lower than the upper head end or the adaptor.

The perforator is initiated from above. The electrical blasting cap or the exploding mount is connected to free end of detonating cord and perforator firing is conducted.

After firing, the perforator is taken out of the pipe and its efficiency is controlled according to holes perforated in the body by shaped charges streams; these holes have to be near the center of all body selections (scallops). The pipe is examined to detect deformation and destruction.

During the atmospheric test, the assembled perforating system is placed on the ground horizontally and exploded.

The perforator is disassembled, the body condition and repeated-use parts condition is examined. Threads and planting places are inspected. The external dimensions near the every perforated hole are measured to a precision of 0.1 mm.

Testing results are recorder at special log, then the special statement is drawn up.